January 08, 2014
The wild weather continues, with buckshot hail salvos, slate-loosening gusts of wind and rain - loads of it. Despite the insanity of attempting any kind of gardening under these circumstances, I took my chance in a short lull the other day  to examine the yield of my aardaker plants. Although the soil is now completely saturated and any attempts at traversing the plot seem like a slightly premature reenactment of World War I, the aardakers are located in pots, sitting on the surface of the soil and thus, in theory at least, able to drain.

Aardaker (Lathyrus tuberosus) is one of the tastiest root foods out there and comes with that additional leguminous gift - the ability to fix nitrogen. It's also one of the most infuriating plants that I've grown. Like some wayward genius, it beguiles me with its outstandingly tasty roots and then, time after time, gives such a lacklustre performance that even ulluco would blush - luminous pink, bright yellow - at it. 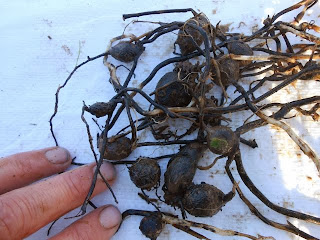 What really bothers me is the miserly quantity of tubers it produces. This is pretty much the total yield from a 15 litre pot. Admittedly the aardakers suffered, as did much else, in the hot spell when our water supply dried up. But I've had better yields from first year seedling hopniss in 9 cm pots. And just like hopniss, received wisdom suggests that you should leave the tubers in situ for a couple of years to swell up, then harvest them. Like we all do with our potatoes, oca, yacon and other single-season-decent-cropping plants? No, exactly. For garden cultivation it needs to justify its existence by being much more productive.

I don't share the sentiments expressed by Professor Henry Higgins in My Fair Lady: why can't a woman be more like a man?  Women are fine. But why can't aardaker be more like mashua, in terms of its yield, anyway? Like that troublesome Tropaeolum, it is also a top-notch ornamental edible, but I've never yet been faced by a glut of aardakers; disposing of mounds of mashua tubers happens every year. 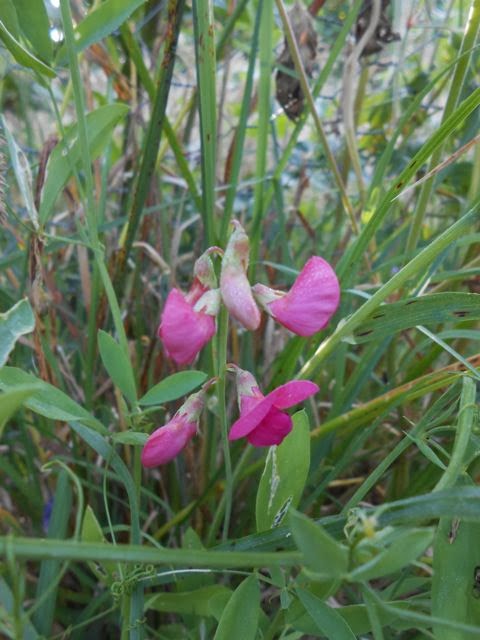 This is, of course, a wild plant and hasn't undergone generations of selection like mainstream crops have. It's considered to be an invasive, noxious weed in some places, choking wheat crops for instance. Those tubers, blessed be their name, allow it to resist mechanical methods of control such as hoeing - it just re-sprouts - and it's hard to kill with herbicides such as 2,4, D.  I think I have the perfect biological control in my possession, however and would be glad to furnish beleaguered authorities with it: slugs, lots of them; they seem to consume aardaker foliage with unparalleled enthusiasm and will strip plants overnight. "Cry 'Havoc!', and let slip the slugs of war!"

What's strange is that cultivation of a kind has almost certainly been attempted in the past. Sturtevant's Edible Plants of the World (1919) cites several sources suggesting it was grown as a crop; Frank van Keirsbilck tells me that between the 16th and early 20th centuries, 'Dutch mice' as the roots were called, were grown in the the Zeeland area of the Netherlands; they were supposedly then sold in France. Frank has also found mention of different varieties in an old Flemish book, but has been unable to locate them. Maybe the interaction of soils, climate, husbandry were different; maybe they had special high-yielding varieties; maybe the story is apocryphal. I just can't believe there were no slugs in the Netherlands. It's not a native of the UK, but a very rare and declining weed. Read about the 'Fyfield Pea' here.

Plants seem to vary somewhat in the shape of their tubers, with some being elongated and others close to ovoid; perhaps they also vary in size, fattening speed and slug resistance. Like so much in the world of alternative root crops, we start from a knowledge baseline of next to nothing. So what I propose, Dear Friends, is that you help me to extend my aardaker accessions to encompass its Eurasian-Siberian heartland and its introduced range in North America; it would be fun to get hold of seeds from the Fyfield plants too. I've no idea how diverse this species is, but would like to find out. Aardaker has many virtues and might, with concerted effort, be amenable to improvement. And even if not, I can always eat my failures, God (and slugs) willing.

Julien said…
Are these seedlings from the seeds I sent you or were they grown from tubers ?

None of the seeds I sowed myself germinated. I'll try vernalization, they may need it to break dormancy.

Rhizowen said…
These were grown from tubers, Julien. I hope your seedlings produce better yields. I have found scarification helpful too when it comes to germination.
14 January 2014 at 15:48

Julien said…
I fear mine wouldn't be that productive neither, but I wish you'll get increasing yields a way or another.
14 January 2014 at 16:40

Anonymous said…
Would you recommend others to grow Aardakers? Have you managed to get better yields since?
1 August 2014 at 19:54