Psophocarpus tetragonolobus - not just a name to conjure with, but a useful tropical crop that's commonly known in English as the winged bean. The pods have extravagant flanges from which its name derives and pods, seeds, flowers, leaves and swollen roots are all edible. They say every bit of a hog can be used, from its tail to its squeal - the same is apparently true of the winged bean.  If you're interested in its potential, you can read all about it here in a venerable document from the 1970s.   Suffice to say, winged bean has generated considerable enthusiasm among researchers and is a member of that elite corps, nitrogen fixing root crops.

Winged bean loves heat and humidity. I've tried to grow it outside here on several occasions, but to no avail. Cornwall is certainly humid, but, although it's said to be the warmest part of the country, this is a partial truth worthy of estate agents and tourist boards.  Warmest in winter is more accurate.  Even that's not strictly true - it's just less cold than most other parts of the UK.  As a corollary, our summers are generally cooler than other areas of southern Britain, due to the moderating influence of the sea.

So growing winged bean outdoors in the UK seems to be an exercise in futility.   My guess is that if you have the kind of summers where you can lounge around in a Hawaiian shirt all night and not get in the least bit chilly, you can grow winged bean in your garden.  But, even if you are able to provide it with the right climate, most varieties are daylength sensitive and refuse to flower at a sensible time of year when grown away from the tropics.  But not all: meet Hi-Flyer, a variety bred by the USDA that has the potential to flower in our long, often-not-so-hot summer days.

I've been fooling around with Hi-Flyer on an occasional basis for more than a decade. I think I last grew it back in about 2003 in an attempt to regenerate my seed stocks.  And I was successful in this endeavour - my single plant grew, flowered and formed a couple of pods, all on a not particularly sunny windowsill, in a not particularly warm house. The sky blue flowers were attractive - big and bold and yet somehow rather delicate; I wish I'd taken a picture of them.  The pods were a sight to behold too; once again I regret failing to capture their architectural quality.

This year, I thought I'd kill two birds with one stone: replenish my supply of seeds and finally get around to eating the roots. In Papua New Guinea, the winged bean is particularly popular and is known by the Tok Pisin name of "asbin".  Asbin roots are  considered a delicacy and special sing-sings (festivals) are organised to celebrate the harvest.  I wasn't exactly envisaging a lavish shindig: there was only enough space on the windowsill for two small plants.  Opinions on the flavour and desirability of the roots vary, but seem to coalesce around "nutty" "beany" and "earthy". 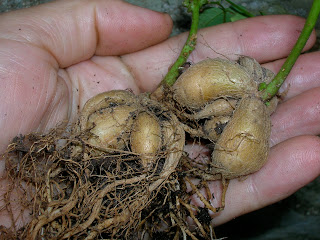 I sowed seeds in about March and plants finally emerged; I potted them on and left them on the windowsill. For a while they grew well, then suddenly they stopped growing and all blandishments in the way of repotting, feeding and watering were as nothing. Not a single flower bud appeared on either plant.  Scratching around in the compost, however, it was clear that there were some thickened roots.  It's well known that other leguminous tuber crops do better when their flowers and pods are removed; perhaps this is the case for winged bean and I had inadvertently created the right growing conditions for tuber formation. I'm utterly mystified as to why they refused to flower, especially as this has never been a problem in previous seasons.

So, for some unknown reason, Hi-Flyer barely got off the ground and could be said to have nosedived, at least in the case of sexual reproduction.

I'm now debating whether I should spare both roots, plant them next season and delay gratification until fresh seed stocks have been produced, or just plough on regardless, eat the roots and repent at leisure if my remaining seeds prove unviable - Radix's reworking of the Goose That Laid the Golden Egg.  Let me know your thoughts: the fate of these two plants lies in your hands.  In any case, I reckon Hi-Flyer winged bean might be worth growing in a greenhouse or conservatory as an all-purpose edible plant for those closet permies out there; you know who you are.
Asbin Hi-Flyer Psophocarpus tetragonolobus winged bean

Jeremy said…
I've always been confused about "winged beans". I grew something called winged bean very successfully in Somerset, but I am sure I remember the flowers as being brick red, and I have no idea what the binomial was. The young pods were delicious, the one complaint being that you had to get them VERY young. In seconds they develop a very tough parchment, almost as tough as the plastic bubble around a small electronic gizmo.

If I were going to breed them, I'd be searching for a no-parchment mutation to create the mange-tout winged bean.
3 October 2011 at 09:53

Unknown said…
Yes, we need some latin clarification. Jeremy, I think you are talking about the asparagus pea - which I have also grown, and dismissed as not-for-me on toughness grounds, but does not require semi-tropical conditions to do well.
This must be something different. And a bean is not necessarily a failure as a food crop just because it does not produce beans. I say it would be valuable to see how the roots survive over winter, and what they do next year.
3 October 2011 at 10:48

Lotus tetragonolobus is the asparagus pea or "winged bean", the one with the red flowers. The pods are really tasty, as you say, but that parchment layer develops far too quickly. If a parchment-free mutation could be found, they would be a very useful crop. I suspect that the germplasm available through the seed companies is just generic asparagus pea which has undergone no selection other than for ease of seed harvest. Breeding a better asparagus pea would make an excellent project for enthusiastic amateurs. I grew them again this year for the first time in a while and was reminded of their potential. Damn sight easier than the big winged bean.

Ian - if only the asparagus pea wasn't so tough it would be a very nice intercrop for your polyculture plantings.

Jeremy said…
That's it Owen. Asparagus pea, winged bean, it's enough to drive a man to drink. It's such a neglected species I doubt that genebanks have many accessions, and they probably haven't assessed them for parchment.

Anonymous said…
I can confirmed that winged bean is Psophocarpus tetragonolobus L (DC). I worked for my Ph.D on this Crop many years ago. Yours...MOHAMMED Selamat Madom.
15 March 2012 at 14:19

paulo said…
I am now growing winged bean since January, its April and they are growing quite good indoors. One plant grows very vigorous, the other so-so and the other not that much. Not one sign of flowers but seems well on the way for some nice tuber formation.
13 April 2013 at 00:46

Nathalie said…
You should probably try accessions from the highlands up here in New Guinea. I have a couple of them growing up here in chilly Kainantu at 1500 m altitude. There are accessions from even higher up which should do even better - but may be slower though in development. 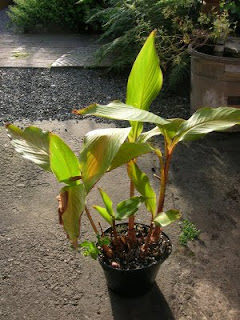