Yacon: Don't Try This at Home 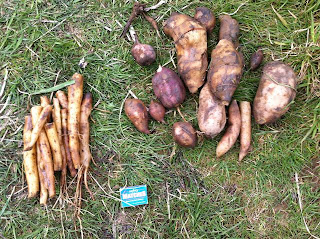 If you thought I was late harvesting the maukas, get a load of this: the 2012 yacon harvest only just being lifted. This really isn't the done thing and I cannot recommend it as a sensible course of action if you want to keep your yacons going from season to season. Nevertheless, they seem to have survived. It was also an opportunity to have a look at the roots of the hybrid yacons (Smallanthus x scheldewindekensis), whose story is told here and here. True yacons are on the right, hybrids on the left. That's a matchbox for scale.

The hybrids have produced long, carrot sized and shaped storage roots, which fan out horizontally in all directions, somewhat like an iron-pumping Eremurus bulb. They're much smaller in diameter than proper yacon roots and not as sweet, with a slightly more resinous taste. Oh well. It was probably a little unrealistic to hope for anything better, but there's no reason why they couldn't be used in a yacon breeding programme to add some new qualities to the genepool. In the Grand Yacon Winter Wipeout of 2010 for instance,
they survived, whereas the true yacons didn't, perhaps indicating some extra cold tolerance not found in the true species; that would be well worth having. And unlike the Jerusalem artichokes, they don't seem to blow down all the time when it gets windy - quite impressive considering their stature. Maybe those horizontal storage roots act like guy ropes and give them extra stability.

In any case, they are enormous plants, towering at three metres or more in height. I put this down to heterosis - hybrid vigour - which often occurs when plants are crossed. No seeds have been set to date, sterility being another common occurrence with hybrid plants; they certainly flowered profusely though, despite the miserable weather last summer. But this summer is going to be different, right?

Catofstripes said…
Interesting that they have survived this dreadful winter, first so wet, now so cold. Inspiring in a way. My first year of growing Yacon this year, with new starts from Realseeds. Wish me luck!
3 April 2013 at 08:40

Rhizowen said…
Catofstripes - good luck. I think you'll find yacon more productive than most of the other Andean tubers, which is a blessed relief all things considered.
3 April 2013 at 09:03

Rhizowen said…
Madeline -that would be nice. In the meantime, we could try using Gwennap Pit: http://www.gwennappit.co.uk/
3 April 2013 at 09:16

The Real Seed Catalogue said…
that is pretty cool. How about back-crossing to yacon, to get bigger tubers?
3 April 2013 at 09:32

Unknown said…
A true perennial yacon, where you scrape around the side and snap of a tuber whenever required.
My spell checker keeps changing yacon to bacon!
3 April 2013 at 10:43

Claire Benson said…
Well I'm trying this in my back garden this year for the first time. Tubers from Real Seeds.

All tubers took and are going great guns on the windowsill so I maybe donating a few plants to other gardens!

Looking forward to the sweet roots next autumn.

Madeline McKeever said…
Gwenappit would do, but I am not sure the Methodists would approve
4 April 2013 at 00:41

David said…
Lol, gwenappit would be good! Live pretty much up the road and have never been there :/ have you thought about using j. Artichokes for a wind break? I use them for that!
4 April 2013 at 17:18

Gardens-In-The-Sand said…
I found your original post about the yacon crossing with wild smallanthus, while searching the edibility of Smallanthus uvedalius. Interesting.

Still can't find any info whatsoever on my native wildflower... which has similar tubers, and is almost too successful in the shade garden.... If I could eat it, it would go a long way toward raising it in my estimation.
27 June 2013 at 12:43

Ottawa Gardener said…
Next summer (the summer that is not yet) is always better than this summer. Always... And your blog always makes me drool! No not for bacon... spellcheck, you old kidder you.
21 September 2013 at 13:35

Johann's Garden said…
Considering that some undesirable strains of yacon exhibit a piney taste I wonder if part of the taste of your hybrids is attributed to the yacon parent itself and not just the other species parent. It could be a flavor that is hiding in its genes and could be weeded out amongst a larger batch of seedlings which might yield an occasional plant with more desirable taste. I suspect that even pure yacon grown from seed would yield a number of piney tasting offspring.
12 November 2013 at 09:26 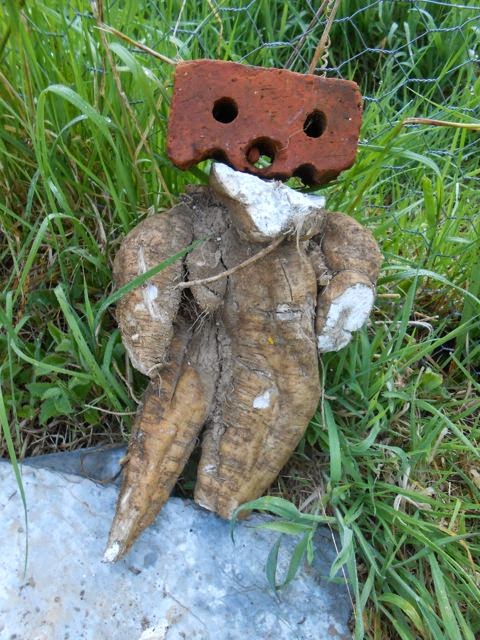