March 18, 2013
On a recent visit to west Cornwall, the weather turned particularly nasty - with  a powerful, chilly wind and heavy, horizontal rain, punctuated by stinging hail showers.  Rather than walk the dunes near the appropriately named town of Hayle and enjoy the warm spring sunshine as had been our intention, I took cover in a large garden centre. With the rain steadily drumming on the roof above my head, I wandered over to the bulb stands, where all sorts of exotic (and insanely cheap) bulbs were displayed in brightly coloured packs. 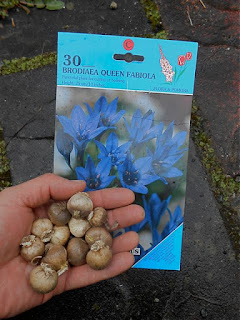 My rooty radar immediately picked up on the presence of copious quantities of Brodiaea 'Queen Fabiola' a pretty blue-flowered Californian bulb, or more correctly a corm - and an edible one at that.  As the voles saw fit to devour the entire 2012 camas crop, I felt as though I deserved a consolation prize. These fitted the bill nicely.


This plant, more correctly known as Triteleia laxa, was an important food source for many native peoples in northern California. It seems that mixed bulb gardens of this and other edible species were carefully managed to maximise their productivity. Regular harvesting and soil disturbance increased the rate at which the plants produced offsets: a well-stocked bulb garden benefited from human intervention. I bet they looked beautiful too - imagine a veg garden composed of a glorious mix of  Dichelostemma, Perideridia, and Brodiaea, all in full flower. How they achieved this without mousetraps is anybody's guess. 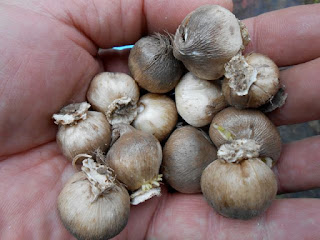 Although on the small side, I've read that the corms are delicious, with a sweet, nutty taste, both raw and cooked. They are still gathered by the Kashaya Pomo people, who boil them, although in the past they were cooked in leaf lined earth ovens in a similar manner to camas.
Aside from numerous native names, Triteleia laxa has a few colourful English ones too: Ithuriel's spear, triplet lily, wally basket and grass nut. 'Indian potato' is also  a name applied to this and a host of other bulbs and roots too.

As all scholars of Milton's Paradise Lost will know, Ithuriel was an angel sent by Gabriel to unmask Satan in the Garden of Eden. The horned one was incognito as a toad, whispering bad stuff in Eve's ear. Ithuriel prodded him with his spear and he was forced to drop the disguise and hightail it out of Eden. And the link with Triteleia is? Perhaps something to do with the spear-like appearance of the unopened flower stalk. That and a vivid Victorian imagination, I suspect. 'Grass nut' is a more practical, if somewhat more prosaic name, as the thin foliage does look quite grass-like. As for 'wally basket', I'm at a loss to explain its derivation. Maybe someone can help me. I think I'll stick with púuchu, the Miwok people's name for it.

The variety most commonly available, in Europe at least, is 'Queen Fabiola', with attractive dark blue flowers. The name commemorates the Dowager Queen of Belgium, who has recently been embroiled in a tax evasion scandal that has rocked the nation. No more heroes anymore.... Fabiola is also the patron saint of divorced women and nurses - and why not? They need a patron saint as much as anyone else.

There are other varieties, which I've yet to see, but might gladden the heart of the avid corm consumer: take 'Sierra Giant', for instance - said to be polyploid (bigger corms as well as flowers, perhaps?) and 'Humboldt Star', which produces very few offsets, resulting in "huge" corms (yes please!). All of this suggests that there is enough variation occurring in the species to consider a programme of sowing and selection to come up with a fab new variety specifically for eating, assuming they are as good a food as the reports suggest. The packet promotes them as "miniature agapanthus", which is probably pushing it, but as well as being edible, they make good cut flowers. In fact, removing the flowers might lead to the formation of bigger corms. Unlike camas, where the main storage carbohydrate is inulin, Triteleia corms are starchy, providing the eater with useful calories with every thrust of the digging stick.

When the weather allows, I'll plant them in a little patch of their own at Oca Acres. As pocket gophers and various other tunnelling critters seem to enjoy them in their native habitat, I fully expect our voles and mice to quickly add them to their diet. I'll keep a few in a pot in the back yard, where the voles at least don't dare to show their faces.  I'm also considering planting a few amongst the cacomitls to see whether I can create my very own mixed species bulb garden and to hell with the clashing colours.

When it comes to reports as to the edibility of various obscure roots, bulbs and corms, I tend towards the scepticism of Missourians with their homeland's unofficial title as the "Show Me State". Before instigating a run on 'Queen Fabiola' stocks around the country, I felt I really ought to put the claims of their palatability to the test.  Please don't try this at home, because, as the packet says, "do not consume this product". But it also clearly states that "the bulbs (sic) are not chemically preserved". So, in the interests of science and with a spirit of enquiry,  I took a corm and peeled it. I then cut it in half; one half remained raw, the other half I boiled until it was fairly soft. I chewed on both and can categorically state that both halves seemed to be edible. The raw piece tasted like a raw peanut, not too bad; the cooked half was very similar to a potato and was deliciously moreish. Maybe Indian potato is an appropriate choice of name after all. I'm just hoping I get to dig a basketful of them this coming autumn.

Ottawa Gardener said…
So the reason why I have a love/hate relationship with this blog is because you are always introducing me to MORE plants. You and Stephen. Curses! and Thanks, you're the best!
26 March 2013 at 16:44