Don't Tamper With My Yampah

May 25, 2011
I mean that most sincerely, folks, I really do. So, what gives - why the earnest plea?  Well, this is the first time I've ever managed to get yampah seeds to germinate, despite several attempts over the years; they're precious and I want them to stay alive. You may already know that yampah (Perideridia gairdneri)  is a North American umbellifer. It was very highly regarded as a food in the Pacific North West region by native peoples where it, or closely allied species, occur. It was also traded over a wide area.
﻿﻿The best bit of the yampah plant is its swollen root, a bit like a mini carrot, which is edible both raw and cooked; not only is it edible - it's sweet and  tasty and is reckoned by some to be the nicest wild root in the region, lacking the bitter, off flavours sometimes found in other plants.   The seeds are edible too and have an aromatic flavour that has been likened to caraway.  Remembering the tale of the goose that laid the golden egg, I decided not to test this, reckoning I'd have my work cut out getting any to germinate at all. One intriguing feature is that the roots are multistelic, that is they produce both a main storage root (the carroty bit) and also lateral storage roots arising from it, an unusual feature for an umbellifer. You can see that in this picture, which is not, I hasten to add, one of my own yampah roots.
My seeds come from Lopez Island off the coast of Washington State, which might just be the closest thing to the Cornish climate that I'm likely to find in the USA.   They were generously harvested by Madrona Murphy, a botanist who works for an excellent organisation called Kwiaht  which is studying the ecology of the Salish Sea. Aside from  persuading her to collect seeds for me, we have had fascinating discussions about the remarkably sophisticated agricultural practices of the First Nations of this area, involving camas meadows (of course), silverweed (natch) and surprisingly, woolly dogs bred for their fleeces in the days before European settlement. Who knew? Not me. 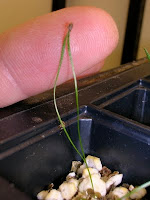 Another surprise - the Lopez Island yampah seeds germinated vigorously after a few months in the fridge. I've potted them up, passed a few on to various people and now I'm waiting.  I have to say, that after their promising start, the seedlings don't exactly exude brassy confidence at the moment. They  have very thin, almost grassy cotyledons and sparse foliage. Wild plants usually occur in grassland, so  this mimicry may offer them a bit of camouflage from grazing animals. My plants, by contrast, look naked and unprotected. They seem to be sitting and marking time, which is why I'm eager that they be protected from the attacks of  slugs, birds, voles and any other as-yet unidentified threats to their continued existence. Tampering by that crowd will not be tolerated. 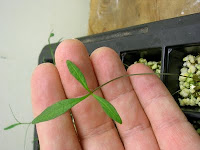 I'm getting a little bit suspicious that I may be the author of their stasis: it's possible that their restricted root run in the modules has prevented the development of their tap roots. Could it be that I've inadvertently tampered with my own yampah and created the world's first Perideridia gairdneri bonsai?  Better pot them on in that case.

One of the problems I can forsee with yampah is common to other relatively slow growing, single harvest root crops: the time and effort spent in growing these things is just not comensurate with the pay back in terms of delicious food. The descriptions I have read do not suggest that yampah roots are large - about the size of an unshelled peanut is one estimate. I'm not sure that I'm patient enough to wait several years before sampling them.

But that's for wild plants; in cultivation it may be possible to boost yields considerably. Steve Dupey, a tireless and meticulous explorer of plant potential, tells me that providing the plants with decent soil can greatly improve their productivity and treble their size.  He also believes that maturity, which usually takes several years, can be speeded up by growing the plants in a greenhouse for a while. Finally, he suggests slicing off the top of the mature root and replanting it, while diverting the rest to the nearest saucepan. With their multistelic proclivities, the tops regrow and you have yourself a yearly harvest of yampah. That's the theory. My seedlings look like they've got a way to go before that could be accomplished without handlens, forceps and scalpel, but I'm happy to eat my words (and the yampah roots) if they put on a sudden spurt of growth in the next few months. Or years.
Perideridia gairdneri Yampah

Mark said…
Intercrop it with talet! Our rainfall here in Glasgow is so horrendous that any extra nitrogen is welcome.
26 May 2011 at 11:36