February 23, 2011
There are a surprising number of edible bulbs, which although quite low yielding, deserve a place in the garden for occasional snacking purposes or impromptu feasts. As I pondered on this a while ago, I came up with the concept of planting up a mixed bed of these species: the Bulbous Belly Border. But which bulbs or corms to choose? 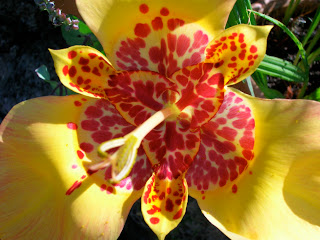 Camas is well-known for its edible qualities and is an obvious candidate.   But another bulb, the extravagantly exotic tiger flower (Tigridia pavonia), must surely be the dark horse in any race to get bulbs onto your plate.  It's a well-known Mexican plant, quite easily grown, with ridiculously large and opulent flowers for its stature. These open in the middle of the day and seem to close just before you get home from the daily grind - a particularly annoying trait in view of their spectacular beauty. Luckily, the flowers appear during the summer over a period of several months, so odds on you'll get the chance to see them in all their glory on a few occasions. 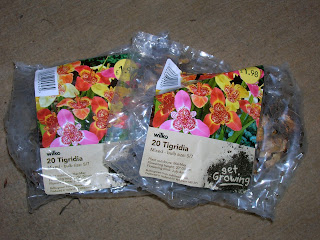 Tiger flower bulbs are often sold in the pile-it-high-sell-it-cheap supermarkets at this time of year, although I wouldn't advise eating these - plant them and consume their progeny after a couple of seasons' detox in your own garden.  As plants they're certainly much hardier than received wisdom suggests and the bulbs happily survive the erratic cycles of wet and cold weather that typify our winters here.

For all its gaudy allure, this is a plant that seems to be adept at generating a considerable amount of confusion and misinformation.  Tigridia, as is pretty obvious, is derived from the tiger, an allusion to the stripes in the flowers. Except they're not stripes, they're spots. The Aztecs, who knew the plant well, referred to the flowers in Nahuatl as oceloxochitl, which means - no, not ocelot, but jaguar flower.  At least both the ocelot and jaguar are spotted New World cats - a definite improvement on tiger.  I can only assume that European prejudices about the superiority of Old World felines influenced the decision to elect the tiger Top Cat when bestowing names on new plants.


The bulbs (not corms as is often stated) were a familiar foodstuff to the Aztecs and were known as as cacomitl.  This has nothing to do with and should not to be confused with the cacomistle, a raccoon-like animal with which the Aztecs were also acquainted  and whose name is derived from yet another Nahuatl word.  And to top it all, Tigridia is also a single species genus of Nymphalid butterfly found in Mexico and South America.  Thankfully, that does at least have stripes. 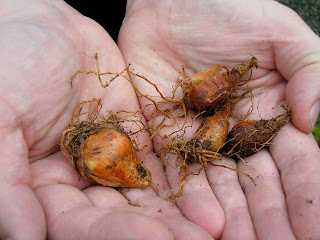 Cacomitl bulbs have a pleasant, sweet flavour and floury texture when cooked, quite similar to a sweet chestnut - but don't eat them raw.  Like the jaguar, they bite.  I was tempted to try one straight out of the ground, but at the last moment, discretion overcame my valour. I would be interested to know what causes the nasty sensation of burning mouth and throat that will surely ensue should you be braver than me. I wonder whether they contain those vicious needle-like calcium oxalate crystals that you find in some other roots and tubers, notably taro.  Cooked, however, they're like a lion tamed; I've had them both boiled and baked and they certainly make good eating.


The bulbs produce large numbers of offsets and if you dig up the clumps every couple of years, you can eat the spare ones.  Yield and bulb size are not spectacular, but there's something quite satisfying and subversive about converting ornamentals into edibles on the sly.
As might be expected, I'm by no means the first person to explore the potential of cacomitl in recent times.  Ken Fern, in his excellent book, Plants for a Future, describes their ease of cultivation and propensity to self-seed in a Cornish garden not so far from my own.

More surprising is Luther Burbank's interest in their potential as a food.  Burbank was a prolific plant breeder who developed hundreds of varieties of ornamental and edible crops at his trial grounds in Santa Rosa, California.  I can do no better than quote the "Plant Wizard" himself, from his 12 volume 1914 book 'Luther Burbank: His Methods, Discoveries And Their Practical Application'. In Volume 10, Chapter 3,  'Tigridia and Some Interesting Hybrids. New Charms in Faraway Flowers', he has this to say:


The development of the bulbs of the tigridias has not been at all a matter of accident. At all stages of the experiment in hybridizing and selection, I have paid the most careful attention to the condition of the bulbs, selecting always those that were largest, firmest and soundest. And the reason for this was not merely that such bulbs usually produce the best flowers, but also that it is worth while to improve the size and quality of the bulbs quite on their own account.


The particular reason for this is that the bulbs of the Tiger Plant are edible. When cooked like potatoes, or made into a stew, they constitute a really delicious vegetable.


To my taste the bulb of the tiger plant is at least the equal of any vegetable under cultivation. It is also highly nutritious. I am not sure that it has an equal among the vegetables of our gardens in its combination of nutritiousness and appetizing flavor.
No one to my knowledge has ever said that about mashua. Or oca. 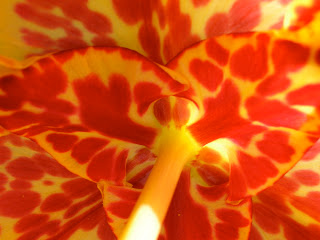 Burbank was somewhat of a maverick and his unorthodox approach to record keeping (what records?) did not endear him to the scientists who were at that time making the first forays into understanding the genetic nature of inheritance.  He liked to cross plants, sow the progeny by the thousand and cull the inferior ones. Maybe that's an approach a bunch of contemporary cacomitl enthusiasts could take: sowing seeds and selecting for the biggest, tastiest bulbs.

Burbank was interested in Tigridia for both its ornamental and edible qualities, but I'm not so worried about the flowers myself; if they were a quarter of the size and the bulbs four times bigger, that would be, to my mind, an acceptable trade-off.  After all, the heart doesn't crave flowers when the belly lacks bulbs.
Bulbous Belly Border Cacomitl Tigridia pavonia

Paulette Whitney, Provenance Growers said…
Nice work! Especially about the improper feline associations. I'm going to track some of these down. Thanks for sharing!!
23 February 2011 at 09:14

Anonymous said…
I should stay strong too, but must admit, that I already think of tucking some bulb in somewhere!
23 February 2011 at 20:55

Rhizowen said…
Hi Paulette
From what I've heard, Tigridias grow very well in Tasmania. Maybe you could market them as Tasmanian tigers?

Hi Emma
The only answer is to stay away from any supermarkets like Sainsbury's or Waitrose where bulbs are sitting, waiting for your willpower to weaken.

Emma said…
OK, so not quite as strong as I thought I was ;) Tesco are selling these (as Tiger Flowers, but binomial name is on the back) in boxes of 20 for £3, with an offer on for 2 for £5.

Wholesale Nursery Web Design said…
Very Nice! your post is such an informative post and i like your efforts very much..doing well! keep it up.:)
28 February 2011 at 11:05

cortona aka emanuele said…
nice , realy nice and informative reading, like a lot the two sense utility of this plant, i have just to find it in italy...mmm wel we wil see!
Cortona
2 March 2011 at 22:07

Anonymous said…
oh my goodness - I've got to get me some of these, they're gorgeuos and I absolutely CANNOT resist an edible that pretty! Thanks for blogging about this one!
3 March 2011 at 20:20

Rhizowen said…
Hi Nellie - they shouldn't be hard to find in any of several supermarkets or in garden centres. They are rather spectacular.


Benvenuta Cortona - Thanks for your appreciative comments. I'm sure you will find Tigridia in Italy.

Hi Alos - Bulbine bulbosa and Bulbinella hookeri are both on my wishlist. They have the added advantage of having foliage unpalatable to livestock and our climate would probably suit them. Have you eaten Bulbine bulbosa?
6 March 2011 at 07:27

Nadya said…
These are lovely! I think I've seen them in our bulb hang-outs, as well; I'll have to get some!
Being in W Oregon, I have camas scattered in several gardens (ate it YEARS ago - found baking best) & love watching for the flowers in the spring.
14 September 2011 at 04:40

Rhizowen said…
Dia - they're beautiful and easy to grow in my experience, often self-seeding here. i expect they might do the same in W. Oregon. I'm wondering whether the colour scheme with camas might clash, but they do flower at different times. Good luck .
18 September 2011 at 17:50

This is definitely a plant I have a great deal of interest in though it is a sounder crop for you maritime edge folks it seems.
19 January 2014 at 16:05

Anonymous said…
I don't know if Europeans thought tigers were superior to jaguars, but today in the English-speaking jaguar-haunt of Belize we call jaguars "tigers". This use of the word "tiger" is older than the word "jaguar".
7 January 2016 at 23:15