October 04, 2010
Being baffled, mystified and bemused is my usual state when it comes to dealings with  Inca root crops.  This is nothing new and is, frankly, hardly noteworthy.  Dog bites man - big deal. 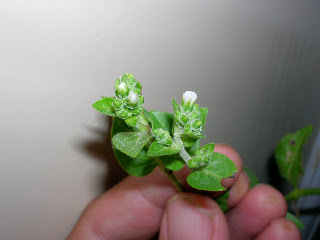 But I'm now happy to reveal that in a spectacularly organised and executed ruse, I've managed to trick some of my mauka plants into flowering. Man bites dog - interesting.

Those with long memories and limited social lives may recall that I managed to produce a single seed - whoops - anthocarp, from a mauka plant which, like me, spent most of the winter staring out the window.

Winter is a singularly unpropitious season in which to expect most plants to flower and set seed.  I determined, therefore, to see whether some cutting-edge daylength manipulation technology might have the desired effect at a more favourable time of year.  Following a period of reflective procrastination, during which  I pondered on the practicalities of said undertaking for about a month, I leapt into action. At the end of July, I started the procedure by religiously wrapping the plants in black plastic at 7pm and shoving them into the back of a shed until 8am the following morning - vespers and matins for mauka, you could say: thirteen hours dark, eleven hours light.  There was a fair amount of genuflection, what with all the wrapping and unwrapping and fitting the pots into the available space.

Throughout this ritual, as I had expected, the plants seemed sublimely indifferent to my actions.  I continued the process, day in, day out, until the end of August, when my trip to Belgium interrupted play.  I shrugged my shoulders and left the plants outside to face ambient daylengths and light levels. 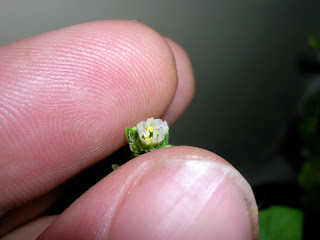 Now, both 'Roja' and 'Blanca', the two varieties Frank somehow magicked out of the air in 2009, are showing flower buds. Blanca has just started flowering, in fact.  I think it wins the runner-up prize in the Ullucus tuberosus Challenge Cup for the least inspiring floral display in an Andean root crop.  Strange, considering how impressive Mirabilis jalapa flowers are.  I'm not bothered though, as long as it forms some viable anthocarps.

I now realise that I should have started this experiment earlier, about the time of the summer solstice, but there may yet be the possibility of seed formation, especially if I bring the plants indoors to speed up the process.  I can only assume that my efforts are responsible, as the other mauka plants, spared the early bedtime, show no indications of any flower buds. That includes specimens of both Roja and Blanca.

If this simple, albeit somewhat tedious, process proves to be a reliable way of inducing flowering, it should be possible to start crossing varieties and selecting the progeny for favourable characteristics.  For that, I'm happy to get down on my knees and face towards mauka on a daily basis.
Mauka Mauka Blanca Mauka Flowers Mauka Roja

orflo said…
You did it!! Congratulations! I planned on doing this as well, but the plants barely survived the drought period and deserved all attention when they should have been wrapped up. Interesting that the colour of the flowers are different than the flower colour of the cipotato variety. If I calculated right, it takes over two and a half months of short daylight before they start flowering, uncovered this should mean about half December before they start flowering and some more time before seeds set...way too late...
4 October 2010 at 09:29

Kath said…
Refelctive procrastination is not to be sniffed at.

Rhizowen said…
Thanks Mark, VegH and Frank. At least it shows that we could, theoretically, produce mauka seeds in Europe fairly easily.
6 October 2010 at 22:12

Esther Montgomery said…
It's one of those funny events where one arrives somewhere by chance (in this case, through Blotanical) and discovers there are people doing surprising things with surprising things which have, until this moment, been completely out of one's ken. It's a delightful post.