Yacon: I am Spartacus 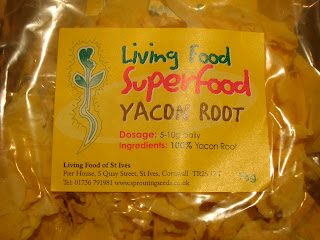 I was shaken out of my complacent, smug, yacon breeder's love-in with Frank van Keirsbilck when I received a worrying email from him some days ago.  His yacon seedlings have begun flowering and he is now concerned that a bit of inadvertent cross-pollination with another, unidentified Smallanthus species, may have taken place. It could be that the so-called yacon seedlings are impostor hybrids.

In support of this claim, Frank cites a lemony scent to the flowers and an overall general unease about their "gizz".  That and the fact that he might have transferred the pollen from the unidentified crop wild relative while he was carrying out hand pollinations.

Actually, part of me is delighted by this news - that genes from another species may have been incorporated into yacon's genome.  This is, after all, the reason plant breeders scour the globe, concocting mashups and fiddling with their GIS in order to locate drought, cold, heat and disease tolerance genes in crop wild relatives.

The other half of me is dreading the discovery that, in addition to all those potential benefits, they'll have inherited a less endearing trait common to most other Smallanthus species: the lack of big, fat storage roots.  I fear that some embarrassing and credibility-reducing retraction will have to follow and my reputation amongst my peers will be mud.

My plants have just started flowering and following Frank's revelations I decided to take a closer look.  I can't pick up that lemony scent Frank describes. This could be a result of a phlegmish cold I picked up in Ghent and which seems to have dulled my sense of smell.  Olfactory limitations aside, there are some noticeable differences.

Leaf shape is, well, different, more toothy and feral in the seedlings than true yacons.
In fact, they remind me a bit of bearsfoot aka leafcup, Smallanthus uvedalius, a North American wild flower, with a wide distribution - but only a bit. Maybe they look like one or other of yacon's putative parents such as S. macroscyphus or S. siegesbeckius. 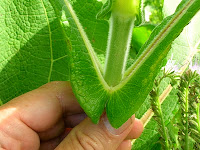 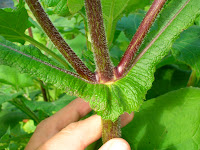 Looking at the stems and petioles, both species seemed to have perfoliate leaf bases and winged petioles.  This is the standard white variety on the left; the "yacon" seedling is on the right; the jury could be said to be out on this feature.  I don't happen to have access to a Smallanthus monograph, so I don't know whether the winged petioles are found in several species or are a diagnostic characteristic of yacon, S. sonchifolius. 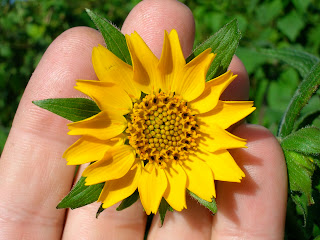 One very obvious difference is that ray florets and at least one whorl of disk florets seem to be open at the same time.  You may not be able to see it, but believe me, it's true.  That ain't right for yacon - the literature says so. 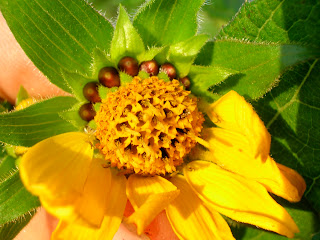 Looking more closely, I've noticed another striking deviation from accepted yacon wisdom: damn me if they aren't setting seeds, which is something else Frank has also noticed.  That's not normal yacon behaviour, so I can only conclude that these aren't normal yacons.  As to what they are, I have no idea as yet.  Curiouser and curiouser.

So now when I look back and forth between the true yacons and the lush growth of the  impostors, I recall that memorable scene at the end of the film Spartacus. In a show of solidarity with their leader, the other slaves claim, one by one, that they are Spartacus and in an act of splendid collective suicide are all crucified along the Appian Way.  I doubt whether the A30 would make an acceptable substitute, but Smallanthus does sound a bit like a trident and net-wielding Thracian.  It matters little: if I lift them in due course and find they're all tops and no tubers, they'll soon be pushing up the daisies.
Smallanthus sonchifolius Yacon Yacon Seedlings

Emma said…
I had a good look at my yacon on Saturday, and although they've put on lots of growth in the wetter weather these past couple of weeks, they're not showing any signs of flowering yet.
27 September 2010 at 08:02

orflo said…
Owen,
I'm quite convinced now that these have crossed with the unknown polymnia, the scent of the flowers (I ask just about every visitor that passes to smell the flowers, and most of them do confirm this lemony perfumed scent). Bear in mind that the seed bearer was the 'New Zealand' variety, which has got a bit of an other appearance compared to the common ones, the leaf stalks are somewhat longer, the colour is , off course, redder, also the stem colour (red as well) and the overall appearance which is less filled. I also had polymnia uvedalia last year, but first of all I never hand-pollinated that one, it never did set seed (which doesn't exclude that a possible crossing could set seed) but the leaf shape is quite different... So, now we have something new, I just hope it will build something decent, especially roots!
27 September 2010 at 20:21

Unknown said…
At worst, you have a non-tuberous something that can be crossed again with yacon hopefully to become tuberous.
At best you have an easily-crossed yacon.
Both sound good to me.
28 September 2010 at 16:08

Anonymous said…
I tend to agree with IAP.

Even if the seedlings don't produce much in the way of tubers they have the genetic potential to do so from mum. And as they have kindly set OP seed's, you are likely to see tuber production improve some in the F2.

If nothing else, this could be the start of a seed propagated line of yacon, which would make the crop much easier to obtain and increase its diversity.

Rhizowen said…
I'm getting the distinct impression that I might have a revolt on my hands were I to give this lot the thumbs down (although I think it was the other way with the Romans, wasn't it?).

As has been pointed out, they might represent something rather interesting. I think I may have identified their dad and will be posting about it (him) soon.