Getting Arty and Chic with Helianthus 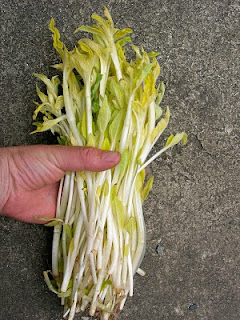 Here's a brand new way to eat your Jerusalem artichokes: blanched - the shoots, that is. I call them artichicons. If it works for rhubarb, sea kale, chicory and a host of other plants, why not that irrepressible artichoke impostor Helianthus tuberosus? Lest you think me smug, I had absolutely no intention of doing any of this. Call it serendipity, call it fortuitous, but as far as I'm concerned, it was an accident.
An errant patch of rampant Jerusalem artichokes needed eliminating. I couldn't face digging them up, so the answer seemed simple: I'd cover them with light-excluding weed control fabric and hope the buggers died off before the bed was needed. I'd reckoned without girasole mio's thrusting and aggressive growth, however.
Weeks passed, then the fabric began to rise like a bloated loaf. Intrigued by this Greater Black-Backed Multiple Tumescence, I pulled the cover away to reveal a forest of pallid artichoke shoots. I picked one and chewed on it for a moment. Not bad, I thought. Not bad at all. I harvested the rest and later that day, I cooked them. 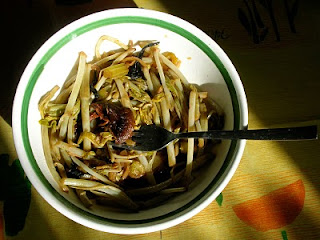 Although ginger, garlic, soy sauce and chillies can make most things palatable, these artichicons really were rather tasty. No doubt correct varietal selection and time of harvesting would lead to an even better experience, reducing the chew factor, but for a first (and unexpected) attempt, I was quite pleasantly surprised. More research is therefore needed, but all in all, a topping way to eat your topinambours. No more will I look upon redundant artichoke capacity with a sinking heart - I'll fire up the wok instead.
Artichicons Helianthus tuberosus Jerusalem Artichoke

Rebsie Fairholm said…
That's by far the most constructive use for rampaging j-chokes I've ever seen, and the most entertaining description.

Raymondo said…
You've given me ideas...I planted out a good number of celeriac seedlings some months back. Not a swollen root in sight! I've been using little bits of leaf in soups and stews and trying to ignore the fact that they'd have to go, being so unproductive. Ah, but now, I shall raze them to the ground and stick a bucket or two over them and eat the blanched shoots.
Thank you for an inspiring idea.
10 May 2010 at 05:24

Anonymous said…
Hi - thanks for you comment over on my blog - thought I'd have a look and see what else you have to say!
... and lo! What a fantastic blog; oozing with info! I love it, count me in as a regular reader! Can't wait to hear about more of your growing adventures...

Rhizowen said…
Rebsie - thanks. They're a lot easier to grow than asparagus.

Raymondo - good luck with the celeriac. let me know how it turns out.

Vegetable Heaven - yes indeed. I'm thinking maybe rosebay willowherb would benefit - nice shoots, but taste not so good. There are many, many other possibilities

Rhizowen said…
Emma - not so much an idea as an incidental discovery, but a good one nevertheless. You almost killed you Jerusalem artichokes - deliberately or by accident?
18 May 2010 at 06:45

Leigh said…
Brilliant - I will have to try this! I don't care for the fresh tubers much, but I absolutely love them lacto-fermented
31 May 2010 at 12:20

Thanks for the comment. I must try the lactofermentation route with this year's crop of artichokes. It's an elegantly simple, yet somehow underrated technology.
17 June 2010 at 23:19

Ottawa Gardener said…
I'm intrigued. I've heard of eating H. maximillian (or however it's spelt) shoots so this seems quite reasonable. Great idea.
23 December 2011 at 21:58

Angelina said…
awesome, another plant in my backyard to cut and sautee, topped with garlic, ginger, spring onion and drizzle of mushroom soy sauce. Yum...

Anonymous said…
This comment has been removed by a blog administrator.
24 November 2012 at 10:13

LillyPilly said…
Do the blanched shoots cause the same 'abdominal effect' that the tubers do?
14 June 2014 at 21:43

Anonymous said…
Did the Jerusalem artichokes continue to grow after you harvested the artichicons?
26 July 2014 at 16:01

If we had harvested them sparingly, I'm sure the artichoke plants would have recovered. We didn't, however. We ate them into oblivion.
27 July 2014 at 17:52 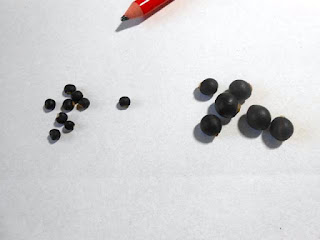 One of the joys of doing a botany degree (back when it was still possible in the UK, happy days) was the opportunity for a little bit of extracurricular reading down between the shelf stacks. First port of call was always the purple-bound volumes of   Economic Botany . Many an hour of sweet happiness was spent engaged in that noblest of activities. On one such occasion, I picked a random volume, opened it at a random page and was soon captivated; the enigmatic tale of an undervalue d Afromontane legume unfolded, a crop wild relative of the winged bean ( Psophocarpus tetragonolobus ) known, at least sometimes, as misobwa ( P. lancifolius ). Oh - and it had edible roots too. The Afromontane zones, with their high mountains, dense jungles, miombo woodlands, swamps and dambo grasslands have always appealed to my inner armchair explorer. Likewise, I've always found crop wild relatives intriguing, both in their own right and as the source of disease and drought resistance, among othe