Up Come the Ocas 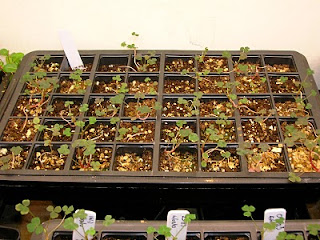 The next generation of ocas are on their way. The seeds I collected last autumn seem to be fairly viable, without recourse to any potassium nitrate or other germination stimulants. I did give them a bit of a clean in a dilute bleach solution though. 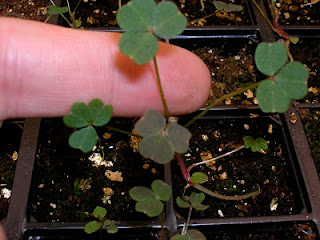 From tiny seedlings big tubers grow - that's my earnest hope. This little fella may be one of the gifted and talented who will be fast-tracked to glory in the months to come. Or not.
As I think I may have mentioned previously, breeding is basically a game of numbers and probability. As well as sowing seeds collected from my better performers (I hesitate to use the term elite germplasm just yet), I've also sown seeds from the mixed bag of early pods I collected and whose provenance is unknown. Some seem to pop up vigorous and enthusiastic, others languish and sulk. The latter tend not to make it up through the compost, succumbing before emerging. No doubt I could mollycoddle them more and increase the survival rate, but I actually want robust plants, with an enhanced ability to reproduce from seeds. I also want plants which tuberise under long days, or at least start to get on with it well before the frosts come.
The genetics of all of this are not clearly understood, not by me anyway. Most likely, there are parallels with the potato, where insensitivity to daylength has been linked to reduced levels of Phytochrome B (PHYB) a photoreceptor pigment that plants use to regulate growth and development. In fact it's night length that counts from the plant's point of view, but no matter, the term daylength is in common parlance and I'm sticking to it.
PHYB deficient potato plants have longer stems, with paler leaves, which are broader and flatter; below the soil surface they have reduced stolon formation, so tubers are not widely dispersed, but are clustered close to the parent plant. Crucially, they produce tubers during the long days of summer. If oca tubers form in the same way, I will be looking for tall, pale plants this year. Come to think of it, the best of the 2009 seedlings were tall and pale.
Lavish seed production will hopefully increase the odds of favourable mutations or recombinations appearing. I'll step in again as pollinator-in-chief and come the autumn, I'll select the best and discard the rest. I noticed that the feeblest plants from last year's crop of seedlings gave puny yields; their defective alleles must be deleted from the gene pool forthwith. Exterminate! Exterminate!
Some call it plant breeding, but really it's just vegetable eugenics. I get to create an all-conquering master race of ocas which will go forth and occupy vegetable gardens up and down the land. Megalomania was never so cheap, entertaining and - legal. I'm nothing but a Dalek in dungarees.
Oca Breeding Oca Seedlings Oca Seeds Oxalis tuberosa

Madeline McKeever said…
If only you had a Tardis to see the results of your work. And, yes many of the cabbage stalks are alive under the slime.
12 April 2010 at 22:05

Your farm might make an excellent location for the good doctor to take on the Gortahorks, a race of half men, half cabbages who are ultimately defeated by local Germans wielding cabbage shredders, salt and large crocks.

Rebsie Fairholm said…
How well you sum it up ... plant breeding is just eugenics where the weakest get eaten. Or composted.

One of the things I love about it is the interrelation of order and randomness. You make all your little calculations and projections, but a lot of it is still down to the whims of the cosmos. It requires a willingness to learn and be surprised at the same time.

I think Donald Rumsfeld, with his known unknowns and unknown unknowns, summed it up very neatly, although in a different, non-plant breeding context.

If I don't cull some of these blasted oca seedlings, within a few generations the whole surface of the planet will be covered to the depth of several kilometres. Life and death, elimination and survival - that's the pas de deux they call evolution.
17 April 2010 at 07:34