I Snack on Yacon

January 11, 2010
On a recent trip to Bangors Organic, Neil dug up some of his yacon roots for us to take home. Although he had professed himself terrified by the voluminous yield the previous season, he had obviously overcome this irrational response to yacon's generous nature and planted plenty in 2009.
Our own yacon plants are missing, presumed dead, in the frozen wasteland where our vegetable garden used to be. With great prescience (or luck), Neil grew his plants in a polytunnel this year and was able to lift the tubers with ease. It would have been churlish to refuse his kind offer. So, into the back of the car they went and thence to our kitchen.
Seeing as my gut flora has been ravaged by antibiotic blitzkrieg, I thought I'd try and get the good guys back in there. Might the prebiotic punch of yacon combine with the probiotics found in lactofermented foods? Would those fructo-oligosaccharides for which yacon is prized be a suitable substrate for Lactobacillus colonisation?
I julienned some of the peeled roots then put it them a jar with a bit of added salt. Copious quantities of a brownish liquor were quickly produced and like a submarine, the yacon disappeared slowly beneath the waters. I also inoculated the liquid with some live whey I had in the fridge. I plonked a bottle on top to keep the yacon squashed, submerged and anaerobic. I then left it to ferment for about five days. 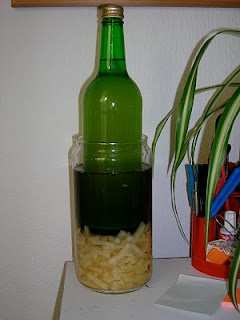 After a few days, bubbles began to emerge from the underwater mass and the characteristic whiff of lacto fermentation became obvious - you'll know it when you smell it. A couple of days of active fermentation later, I decided to taste my Yakraut.
I lifted out the bottle and extracted a few of the pickled pieces. They were slightly flaccid, but still crunchy. Next - the taste test. They were, predictably, tangy like sauerkraut with the sweet taste of yacon - nice. Nurse, fetch me my cheese and biscuits.
Fructo-oligosaccharides Lacto fermentation Smallanthus sonchifolius Yacon Yakraut

Catofstripes said…
A braver man than me! Hope it helps your recuperations.

I'm keeping my fingers crossed for my new yacon baby, kindly sent to me from overseas, it was looking good and I potted it up in the unheated heated greenhouse to sit out the winter. Unfortunately said greenhouse has more closely resembled a deep freeze for the last three weeks and a lot of stuff has passed over as a result. The Yacon may or may not be one of these casualties.
14 January 2010 at 21:15

Jeremy said…
Sounds tasty. And you really should send this post to Sanford Katz of Wild Fermentation etc.
15 January 2010 at 11:10