Happiness is a root called Hopniss

June 17, 2009
What's long and pink and gets stuck in tarts? Rhubarb, of course. Who says old jokes are the best? Let's move on - sharpish. So, what root crop is long and thin with bulges like a pet-swallowing python and tastes really good? That's a bit more difficult for the uninitiated. The answer, as zealous enthusiasts of future foods may have already guessed, is groundnut (Apios americana). 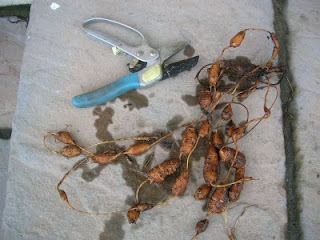 identification. Not only does it taste nice, it will survive our winters (and summers) and is nitrogen fixing. This must surely be the most uneglected of the shamefully neglected potential new root crops. I mean to say, down in Deputy Dawg Country, or a little over the border in Louisiana, they had a university department actually trying to domesticate this species. Just as they was making some progress, the darn funding got pulled from under 'em and they was left high and dry, doggone it.

It seems that the root word for Apios americana in the Algonquin languages of the eastern USA is "pen". This occurs in various forms such as openauk, penak, etc. "Hopniss", as in this post's title, is derived from the same root word too: o-pen-iss. For some reason "hopniss" seems to have broken out of its original Delaware boundaries and expanded its range above and beyond nu-nu and all the others. It's not such a bad name, having currency among wild food enthusiasts such as Sam Thayer, whose article on Apios americana is here. He provides plenty of interesting information, as well as some recipe suggestions. The climbing, winding stems also have a passing similarity to hops, so perhaps the name is reinforced by this happy, I mean hoppy, coincidence.

I've mellowed a bit since then, but I've also gained a few more accessions, purchased from various nurseries in the UK , or gifted by other enthusiasts. They vary in the colour of their flowers and the degree of hairiness shown by the leaves and stems. The tubers seem to vary in shape as well. Ken’s is still one of the best. One day, when a mysterious benefactor secretly deposits some serious wonga in my coffers, I'll get round to doing proper characterisation of them all, measuring emergence date, vigour, yield and taste of this eminently edible, high protein, nitrogen fixing root crop. Then comes the breeding work – I can’t wait. Details of my Pay Pal account are available on request, Mr Magwitch.

Axel said…
Hello!
Nice blog and nice to read about hopniss or potatisböna (potatobean) as we call it sweden!
It's really interesting that they undertook it to make hopniss-varieties for commercial growers. It's sad they were unable to continue.

I found something interesting about hopniss while searching the internet. Maybe Japan has some nice cultivars of it!? They call it hodoimo, i'm not sure if its Apios americana, A. priceana or A. fortunei that they are growing though. But they seem rather serious about, making chips (crisps) some kind of drink and some kind of candy. I even saw a picture of some tubers on a stick on a barbeque!
Look at this: http://hodoimo.naganoblog.jp/

Nice to hear from you. I know that Apios americana has been introduced to and is cultivated in Japan on a small scale. The URL you give shows some intriguing possibilities, both in terms of cultivation and preparation for use in soup. Another name, apparently, is "apiosu", which kind of figures. I'm guessing this is Apios americana, but I'm not certain. I read a paper about the introduction of hopniss to Japan, but can't seem to lay my hands on it at present. I think the work was carried out at Tohoku University by someone called Hoshikawa. It's quite possible that Japan would be a good source for improved cultivars and cultivation techniques.

Does hopniss grow well in Sweden? Where did you get your plants from? I expect the northern adapted triploids would do best for you - unless you know different.......


Clearly "apiosu" is being cultivated as a niche crop and has been promoted on TV. They seem to be selling the tubers - presumably these are from an improved variety.

It would be great to hear from anyone in Japan who has experience of growing, eating or breeding apiosu/hopniss.

They are claiming that apiosu contains 30 times the calcium, 4 times the iron , 5 times the fiber, 6 times the protein, 2.5 times the energy, (calories?) compared to ordinary potatoes as well as vitamin E . It's good for young and old, pregnant women etc - oh no, not another superfood!!!.
13 July 2009 at 20:03

Axel said…
Thanks for the answers!
I look around and found a rapport from 1993 written by Hoshikawa, http://mitochon.gs.dna.affrc.go.jp:81/csdb/jc/jc64/64323.pdf could it be the one you reffered to?

I wonder if they, in japan, has any development going about with their native Apios fortunei.
I have also come across some information that the Apios priceana has bigger tubers than A. americana as a average. Is it perhaps that the A. americana is much more common and more suitable for selection of different clones?

My hopniss was collected in Maine, usa, some time back. I got it from a botanical garden, where i work in the summers seasons. It grows well there, almost like a weed (at least in the bed where it grows). I will try to grow my plants in different places to see how it goes. The biggest tubers i have dug out of the soil has been maybe 3-4 cm wide. But those i've seen in picture from the japanese pages haven't been so much bigger.
By the way, the hopniss from my work does set flowers but i haven't seen seedpods on it...
17 July 2009 at 14:32

Mark said…
What kind of rhizobium inoculum does Apios need? I remember somewhere I think it said cowpea (this means the Bradyrhizobia group of bacteria). Not sure if such exists in British soil and it needs to be ordered. Any ideas? I need to know as I will be going back to Scotland sometime soon, and would like to get reasonable tubers. Maybe the corerct inoculum might help increase the size of the tubers
16 January 2010 at 03:17

As you have mentioned in some of your other posts, Bradyrhizobium species are required for apios nodulation. As my original plants came as tubers, they were already colonised with what are presumably the right species and they nodulate really well. It's easy enough to pick off some nodules then crush them in some water and pour them on any "virgin" seedlings or tubers that don't have any nodules.
16 January 2010 at 22:10

Gabriel said…
I've been reading about it all day today and for sure will try it when the weather warms up.
I'm in a summer dry temperate climate in the Romanian plains.

From what I understand, the dutch tubers should be hardy to at least -25 C right? Pfaf.org lists it as hardy to zone 3

Also been reading about people harvesting it by just pulling the plant up - and the roots come up as pebbles on a string, did you find that to be true?