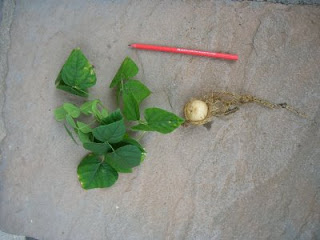 Never was the phrase "small, but perfectly formed" more apposite.  I took the offending plant, peeled the tuber and ate it.  It was sweet, certainly, but with a slightly starchy taste and texture like that of a raw potato, not that I eat raw potatoes that often, only as part of a calorie-controlled diet.  Still, it wasn't bad and would probably have been a lot better in a bigger pot where the tuber could have developed properly.
Ahipa can grow grow quite well in the British climate, but I would say a good summer is needed.  2007 and 2008 were not vintage years for ahipa in the UK.
To guarantee success they'll  need to be started off in a greenhouse and if you want ripe seeds, a greenhouse, polytunnel or cloche will ensure they get the extra heat needed to ripen those seeds.   Eduardo Leidi Montes, an ahipa researcher in Spain told me that he thinks the crop has real possibilities in a Mediterranean climate. Such summers tend to be the exception rather than the rule here. All those ex-pat Brits, downing Newcastle Brown and chewing  Marmite sandwiches - they
may be missing out on the ahipa plants growing in the fields opposite El Pub.
So the school report might read something along these lines : "Ahipa shows promise, with the potential to make a useful and original  contribution. However, Ahipa  must concentrate on completing tasks in a satisfactory manner within agreed time frames and show adaptability in dealing with changing circumstances".  Overall score C-.
Ahipa Legume Lost Crops of the Incas Pachyrhizus

threnody said…
Hmm, yours sort of resembles a turnip - but I take it you spent a lot more time and energy to get that then most turnip growers would. I'm about to start experimenting with oca and yacon in upcountry Hawaii, and I hope I have better luck than you.
27 March 2009 at 02:00

Ottawa Gardener said…
Well now I'm thoroughly blase about growing this plant now but much better informed about some of the challenges of growing them in the UK. As I live in Canada, I read this with a certain sense of exotica and then wonder if the variety that I saw growing at Solana Seeds(?) is worth a try? Though it is not the bushy one I think.
29 March 2009 at 18:01