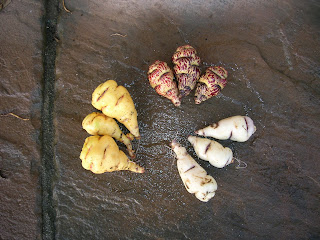 I suppose an appropriate subtitle might be "mashua, the tuber with the taste that torments". Chances are, that having read such a title, you would be quickly dissuaded from reading further. That would be a shame, because mashua is an attractive and intriguing plant. It was, if my memory serves me correctly, the first of the unholy trinity of crap crops that I ever cultivated.


When Woody Allen described himself as nauseous and tingly all over, I don't think he was referring to the physical effects of mashua consumption. In his case he was either in love or had smallpox. However, when I eat mashua, I get a similar reaction - at least I feel a bit nauseous. I don't think I get any tingles. And it's certainly not love at first bite. This plant is euphemistically referred to as having an "acquired taste". I'm struggling, manfully, to acquire it. The Incas, in their wisdom, knew better. Mashua was a woman's food, which men avoided due to its anaphrodisiac effects. Mashua was, however, one of the Inca military's secret weapons. It was fed to the troops to keep their minds on the job - killing people, instead of fathering them.

Problem is, most of the females I know feel exactly the same about mashua as a food: nice plant, shame about the taste. Others, like Frank van Keirsbilck seem to think the flavour is OK, at least on occasion. I wonder if individuals experience differences in palatability because of their varying genetic ability to detect the bitter compounds mashua contains - something akin to the so-called super taster phenomenon.

Mashua (Tropaeolum tuberosum) is a tuberous version of the garden nasturtium. A range of tuber types can be seen on this post. These are visually attractive, often with purple flecks and given a mild autumn, the yields can be quite good. The word nasturtium is derived from the wrinkled nose displeasure induced by tasting watercress, the one and only truly original Nasturtium - think of it as nasal torsion, if not torture. The genus Tropaeolum acquired the common name 'nasturtium' for the similar flavour of its leaves to Nasturtium i.e. watercress. Here's a secret that anyone who hasn't eaten mashua might like to consider: if you turn your nose up at watercress, just wait till you try mashua. In fact mashua contains some of the self same compounds as the brassicas, isothiocyanates, which give it a radish-like flavour when raw. It also has a strange perfumed quality about it, which is unique, distinctive and not like any cabbage I've ever tasted. This is particularly noticeable when the tubers are boiled.


Flavour notwithstanding, mashua is actually quite nutritious, with a high protein content, good amounts of viamin C and a whole bunch of antioxidants with long names like delphinidin 3-glucoside-acetylrhamnoside , cyanidin 3-glucoside and delphinidin 3-sophoroside-5-acetyl rhamnoside.
It's also very pretty, with attractive lobed leaves on long stems, which either spread over the ground or climb upwards. This makes it a worthy ornamental that ought to be seen more often in gardens. The flowers are bright orange beacons amongst the sea of foliage, with a shape that shows their obvious affinity with the good old garden nasturtium; mashua's are smaller, but still very attractive. Bees seem to enjoy them. Here's a picture Frank van Keirsbilck has kindly allowed me to use. 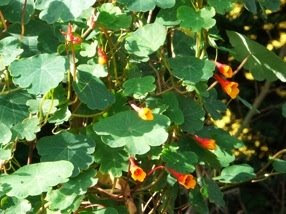 Everyone talks about how tough and hardy this plant is. It resists pests and diseases and also has nematocidal properties etc, etc. These effects seem to be attributed to the presence of those isothiocyanates. There does seem to be a downside, however.


No one seems to mention that cabbage white butterflies seem to enjoy it about as much as they do cabbages. I've seen my plants covered in little black caterpillars that swell alarmingly, seemingly overnight, into bloated chavs, resplendent in lurid blue and yellow shell suits with "am I bovvered?" warning colouration. They obviously know good quality isothiocyanates when they taste them and will strip mashua plants completely.


The variety 'Ken Aslet' is an ornamental one selected for its reliable summer flowering. Frank's picture above is almost certainly this variety. It also produces yellow and purple flecked tubers in reasonable quantities. The "proper" crop varieties flower and tuberise - you've guessed it - in the late autumn. In a very mild year they try and set seed, but without protection they are frosted off in their infancy. 'Ken Aslet', on the other hand is definitely capable of producing viable seed. One year I had a whole load of self-sown seedlings appear in a polytunnel. So, unlike its comrade crap crops, oca and ulluco, breeding mashua could be a relatively simple undertaking. With a bit of daylength jiggery-pokery, it should be possible to get some of the other varieties to come into flower at the same time, cross them, then select the progeny for desirable traits like early tuberisation, vigour and hell, why not, taste even. A few inverted buckets over the plants might well suffice, or why not put that redundant rhubarb forcing pot to good use for a few weeks in the summer?


This plant, in spite of caterpillar depredations, grows well, looks good and is supposed to have numerous beneficial and pest reducing properties. So, damn it, why can't it taste better? Maybe it all depends on how you cook it. As is usual with Andean crops, they are often processed in various esoteric ways. In mashua's case this includes freezing the cooked tubers or soaking them in molasses. Still, bread production is a fairly elaborate process to the uninitiated. One resolution for this year is to try preparing the coming season's harvest in a few more imaginative ways. Boiled or roasted they retain the peculiar and distinctive mashua taste, which I find hard to stomach. I wonder if this is actually due to some of the other chemical components rather than the isothiocyanates - maybe some of those antioxidants?


Some plants seem to show fasciation, growth in which stems become flattened, with leaves massed at the top like a brush. I've seen it frequently in 'Ken Aslet' plants. I'm guessing this is caused by one of those annoying little viruses and probably depresses yields too; it certainly depresses me. Still, I'm sure a bit of plant tissue culture would rid the plants of this problem.


As is usual with these things, it has all been done before by someone else. In the late 1980s I recall reading an article in the HDRA newsletter by someone called Paul Parker. He had imported mashua from South America and was growing a number of varieties in his garden in Leicester (I think). I would be very interested to learn more about his work. Are you still out there Paul? 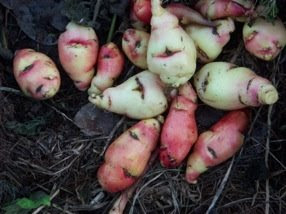 Here's an excellent antidote to my verbosity - another picture courtesy of Frank van Keirsbilck. You get some sense that mashua is a fairly diverse crop in terms of tuber colouration.


To my mind, mashua is a bit of a Cinderella crop. Unappreciated and overshadowed by its sister crops oca and ulluco, it needs some Prince Charming to come along and do some serious research and breeding work on it. Tuberisation and flowering somewhere a bit closer to midsummer than November is a must, as is virus removal. I'm hoping the clock will strike twelve and it'll be turned into a pumpkin - at least then it might taste better.

Anonymous said…
Has anyone got a recipe for mashua or indeed for any of the ART's? It would be nice to get a collection of authentic recipes together.

Has anyone actually been served ART's while on holiday in South Aerica?

Can anyone recommend a cookery book that covers these crops?

Ann said…
I have been looking around for more information about Andean tubers, so even this is an older post... thanks for the info. I didn't know that Mashua was a tuberous nasturtium, technically. Fascinating.
5 March 2013 at 16:48


The variety 'Ken Aslet' is an ornamental one selected for its reliable summer flowering?

I've not read this before. I wa s using Perennial Vegetables by Eric Toensmeier as a reference to select this as an edible day-length neutral variety. 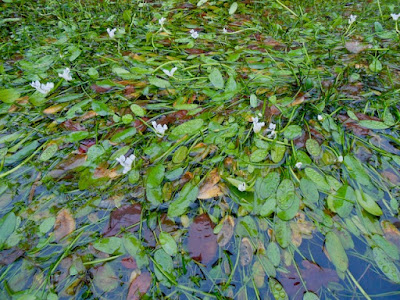